Page still under construction and not everything may work yet.  PREVIEW ONLY

Fox Company is proud to show our partnership with the 120th Station Hospital.  This Unit was formed by friends, spouses and significant others whose passion for WWII equals ours.  This Unit is open to both Women and Men to portray a full Medical Hospital.  This Unit will also work closely with Fox Company's medics and troopers for after battle triage simulations.  The 120th Station Hospital Crew is under the direction of Diane Erickson and you are interested in joining up please click the below button to be taken to another page to submit your information.
Click Here to Join the 120th

We have divided this category into 2 parts: On Duty and Off Duty 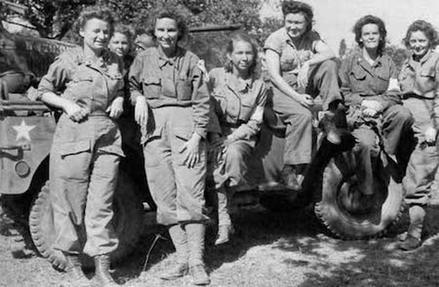 The Civilian dress might be the easiest of the Off Duty options as finding a great set of Dress Uniforms or Off Duty Dress in your size might be challenging or pricey.  Use your creativity and find one, make one or combine vintage hats, dresses and purses for a great impression.

For the Men's category we have split the differences between Enlisted and Officers and seen below.
Enlisted
-HBT
-Wool Shirt and Trousers

​The 120th has decided that if you are portraying an officer, you should be wearing a Class B uniform. This would be a set of Officer's Wools or Chocolate uniform or a mix of both the Chocolate shirt with wool pants or wool shirts with Chocolate pants. Appropriate rank insignia on the shirt collar and the look is complete with a khaki tie. The M41 jacket or tanker jacket is common added to the Class B look.

​As for class A's, you can wear a pink or chocolate shirt and pink or chocolate trousers. No wools. No ike jackets unless the event is themed for 1945. Also your insignia is worn on the jacket instead of the shirt. Please post any questions or comments.
History of the 120th Station Hospital

Where CAn buy these amazing uniforms?

Below are a few of the places you might find items for your impression.  Ebay, Craigslist, Etsy, antique stores, making one yourself or a reenactor board may be a better option.