Below is a guide written to show the different stages of what the 502nd PIR would have worn throughout WWII and how to take basic impressions and make them info great impressions.  Enjoy and props to my buddy Casey for putting this together.
﻿Basic training/stateside combat gear﻿
This is an impression that takes very little extra money to produce and is something fun to bring out at a training event. It is by no means a requirement for our unit (I have very seldom worn it) but it is a great addition to anyone’s overall impression. 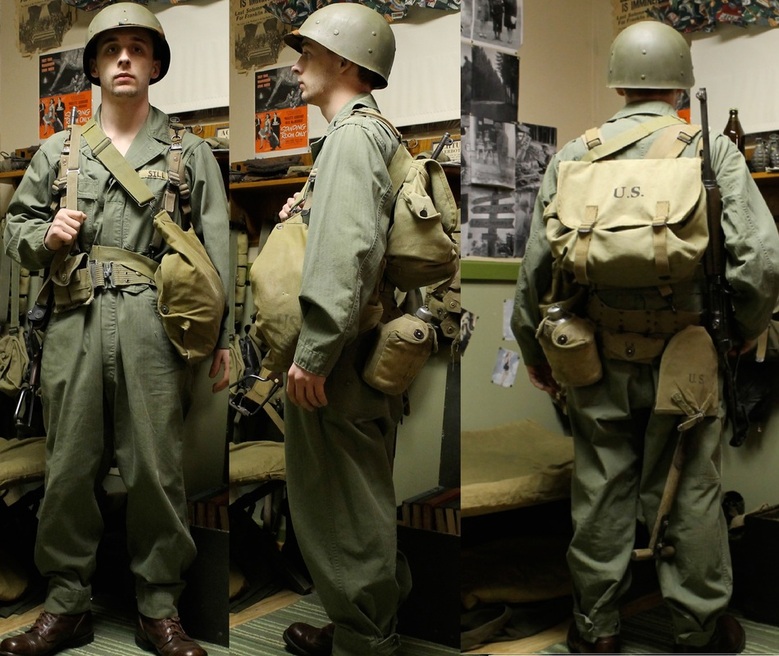 HBT coveralls are the uniform for this impression (a side note, the guys loved HBTs and HBT coveralls for their comfort and they can be seen in photos throughout the war).  A nametag is present on the left side of the chest. A key for this impression is the web gear. It’s all the early war lighter shade. A metal cap canteen is used and the kidney gas mask bag is a must. The helmet liner is worn alone, without the steel pot. T‐Handle shovels were used universally at this point of the war, as the M43 entrenching tool had not been issued yet.  Boots should be the regular army service shoes, but un‐bloused jump boots will do just fine.
Training prior to the Normandy invasion. England 1944
This is the uniform that would have been worn in England during the months leading up to D‐Day. It is actually very different from what the guys wore when they jumped on June 6 and much of this impression will be used to demonstrate the differences between the two impressions. I’ll show you the load out for a rifleman on this one. 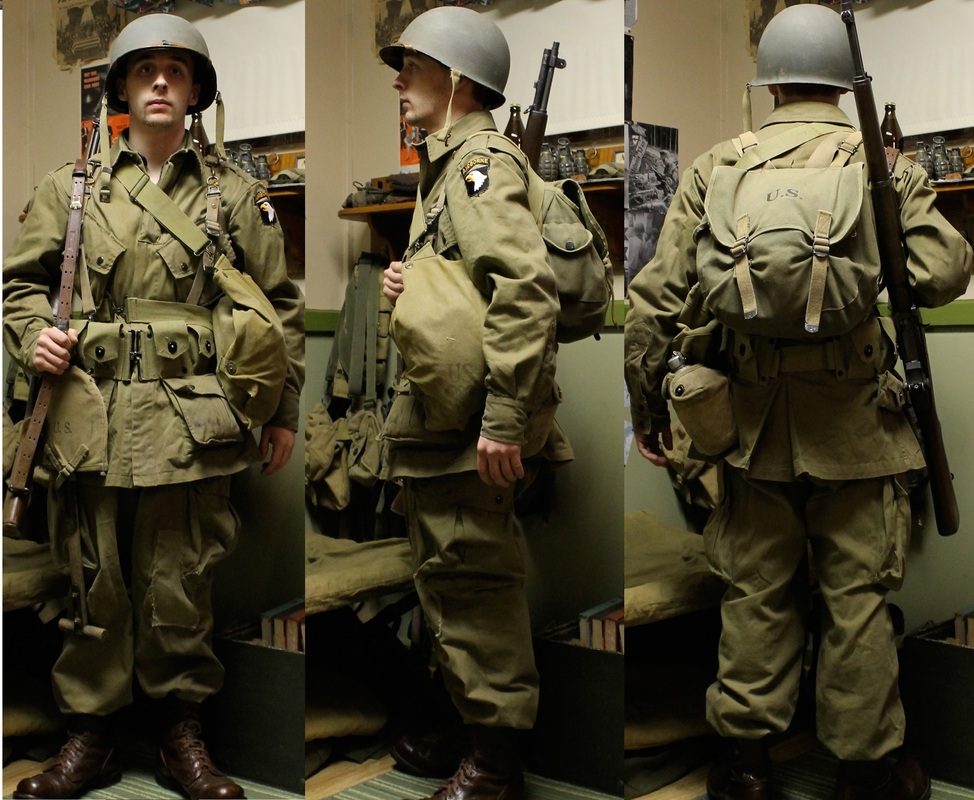 Unreinforced M42s are worn, and the gear is quite minimal. A name tape should be attached to the left chest, (although I don’t have one on in the pictures). The kidney gas mask bag was still being used at this point. Web gear is all still the lighter khaki color, minus the musette bag, which is transitional. Some transitional gear was seeping into the picture at this point, but as I said, the vast majority was still khaki.  The helmet is plain, no net or scrim, and unmarked, no heart.  This set up (minus the kidney gas mask bag) is what most airborne impressions look like, which is one of the major points I’d like to make in this guide. Look around
at the next event we’re at and you’ll notice. The gear is straightforward and minimal and the pockets are empty. There are so many little things that make an impression tick, and going without them will have you looking like this at all D‐Day themed events, which is a big mistake.
D‐Day
As I said, most reenactors look like the above pictures when they are portraying a 502 trooper in Normandy. That is OK, but there are many extra steps you can take to really look like you just hit the ground outside Ste. Mere Eglise. 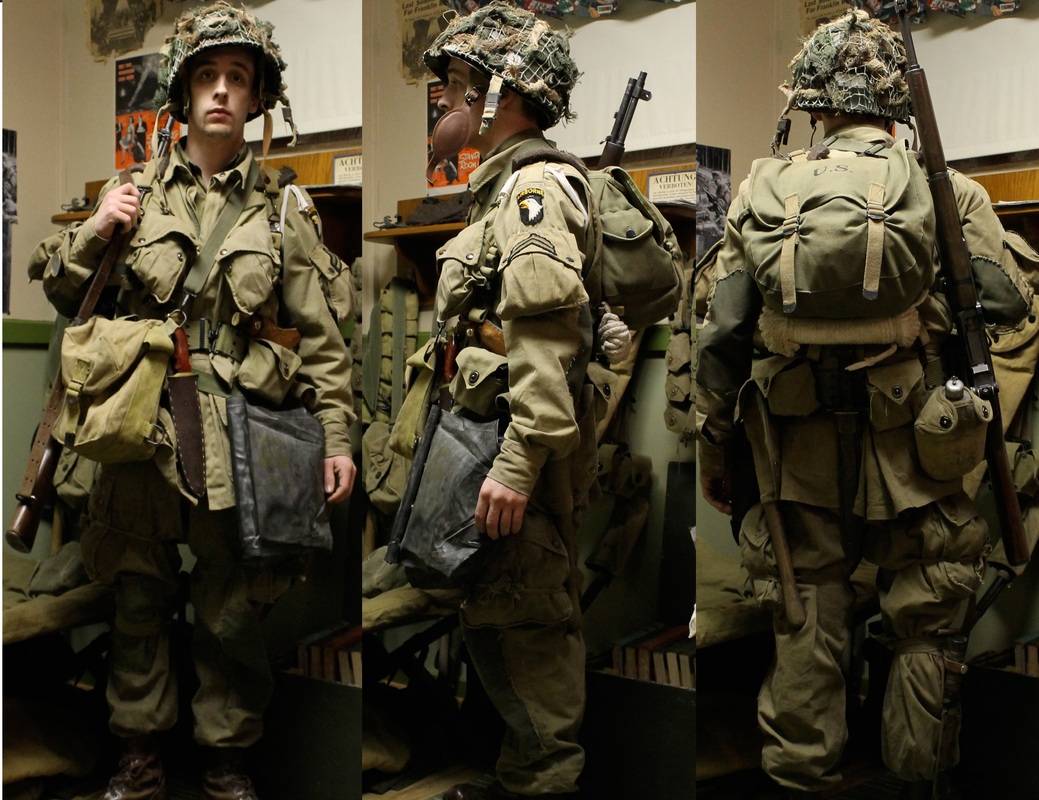 There is one rule when it comes to Normandy themed events….. more. These guys were LOADED down on D‐Day. They gave paratroopers lots of pockets for a reason. We need to use them. And not just your pants pockets.  Fill every pocket on your jacket to the brim with anything you can think of. If you have to use non‐period filler that’s OK, but it is best to find period filler. You should
basically become a walking footlocker. Shaving kits, sewing kits, rations, lots of extra socks, anything and everything. And then find some more. I have a good test to determine if you have enough stuff in your jacket pockets. If your M36 suspenders can be worn in front of the breast pockets on your M42s, you don’t have enough stuff.

Now lets go over some finer points of the impression. First off the helmet. Every regiment in the 101st used scrim, but it was heaviest in the 502. Almost all troopers of the deuce used large amounts of scrim, so load it down with as much as you can.  Next, the heart. The “tic” system to differentiate between battalions was not implemented in the 502 before Normandy. So the heart is all that should be on your helmet. The lack of “tics” is why the 2nd battalion wore the white armband around their left sleeve (3rd batt wore it around their necks).  Also, the nametape that was used during training needs to be removed from the uniform, unless you are an officer. Photos of 2nd battalion 502 in Normandy reveal that officers were still wearing their name tapes, but there is not a single photograph of the 2nd battalion that shows enlisted men wearing them.  There is one notable inaccuracy in my pictures, and that is the lack of a gas brassard.  These were issued to all regiments of the 101, but its wear was most strictly enforced in the 502. Everyone wore them.  I've added pockets to either sleeve of my 42s, and while there are photos of 502 troopers doing this, it was much less common than in the 506. I think we do a good job of this. In a platoon, I think it would be accurate to see maybe 3 guys with added
pockets, which is about how many of us use them. Also, in regards to the uniform, PFCs did not add chevrons to their M42s during Normandy, so both Pvts and PFCs should be bare‐sleeved.  Next to the gear. The most notable difference between this impression and the training impression is the use of a pistol belt and rigger pouches in lieu of a cartridge belt. Rigger pouches were by far the most common method for riflemen to carry their ammo in the 502 during Normandy. Very few cartridge belts were used.
This is one of the biggest inaccuracies among airborne reenactors. The gear is still almost entirely khaki and a metal cap canteen is used, as they were still far more common on D‐Day. I’d like to again mention how much equipment each trooper carried. To give you an idea of how much gear should be attached to your belt, I’ll lay out how much ammunition was carried into Normandy.  For troopers carrying the M1 Garand, each individual jumped into Normandy with 136 rounds of ammunition. Some may have carried more, but no one carried less.  That is 17 en blocs full of ammo, or 4 full rigger pouches plus one in the rifle. Also, 60 riflemen per company carried one belt of LMG ammunition in addition to their own ammo.  For troopers carrying the M1a1 carbine – each individual jumped with 175 rounds of ammunition. That is 12 magazines. (rounded up).  Thompson SMG, each individual jumped with 300 rounds of ammunition. That is 14 20 round magazines. Hand grenades – Each individual jumped with 4. These were usually stored in a GP ammo bag (hanging on my right side) or in your pockets.  That should give you a pretty good handle on how many ammo pouches you should carry. It would be hard to jump into combat with 175 rounds of carbine ammo and carry only one carbine ammo pouch.  The end result of all of this will take your impression to the next level and get you away from the cheesy reenactor look. 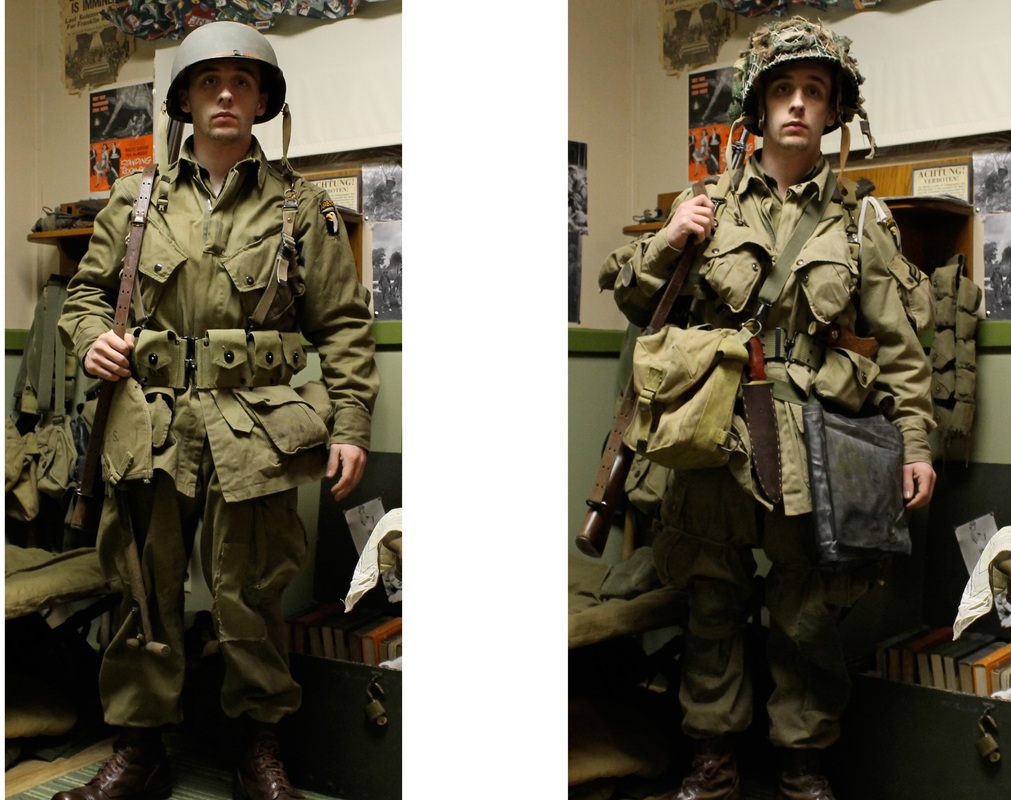 Operation Market‐Garden, Holland 1944
It seems like we very rarely take part in Market‐Garden themed events, which is kind of a shame.

I won’t spend too much time on this impression, but the first thing to note (obviously) is the use of M43s. As I said earlier, the 502 used them almost universally during Market‐Garden. Also, the helmet has the para first aide pouch attached to the net. This is commonly mistaken as being something that was only done during Operation Varsity, but photographic evidence shows it was very
common in the 502 during Market‐Garden. This impression looks more “refined” than the D‐Day impression. After experiencing Normandy the guys really began to figure out what equipment was essential and what could be tossed out. They carried
significantly less during this jump, as is evident in these photos. Rifleman almost all used cartridge belts instead of pistol belts and rigger pouches. The pockets of the uniform, however, should still be full! The American flag is attached to the right sleeve of the jacket. This was the only time during the war when the 502 employed these flags and they were very quickly discarded. They should not be worn on your M43s at any event that has a post Market‐Garden theme.  Some more OD#3 gear was beginning to show up by this point. I like to mix a few pieces in with my khaki gear. 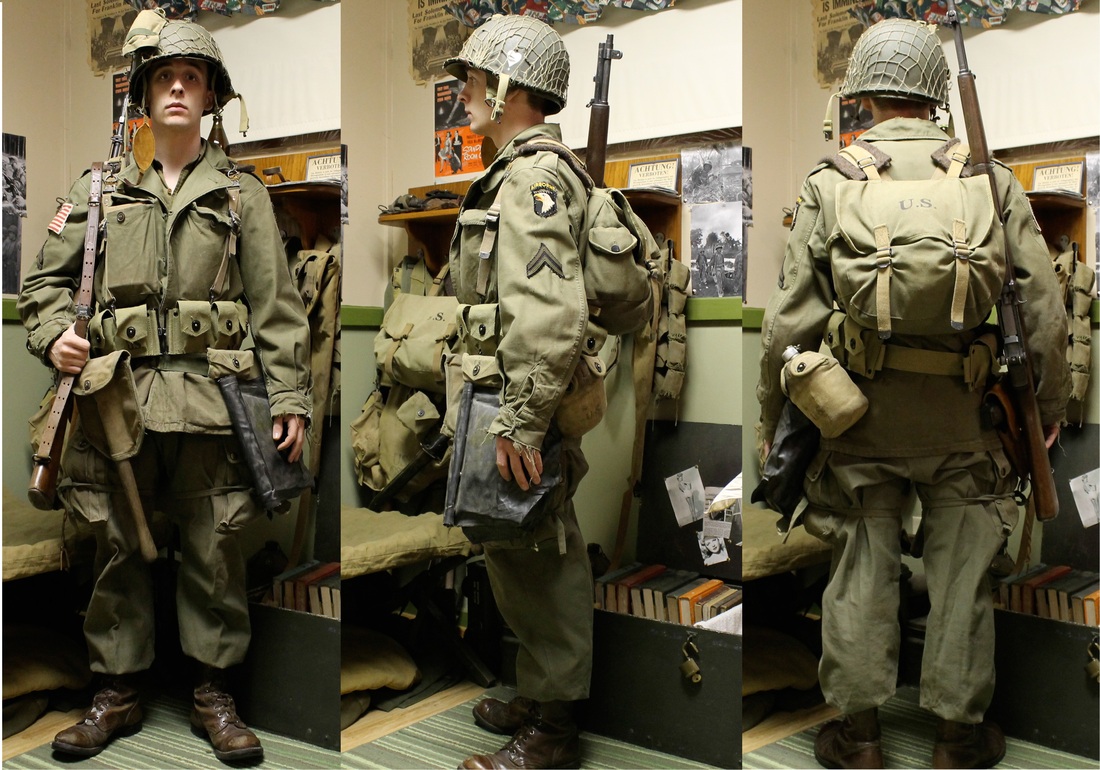 Battle of the Bulge Dec. 1944 – Jan. 1945
This is the time to get creative!
My favorite impression to improvise with, these guys were wearing anything and everything when they were thrown into the Bulge. Grow a beard; wear M41s, 43s, Mackinaws, anything you want! The best is to wear a combination of different uniforms. In these particular photos I’m wearing M43 trousers with a winter combat jacket and a cut off overcoat. As far as gear goes, think of the exact opposite of D‐Day.  Go as minimal as you can. You still see photos of guys with suspenders and musette bags, but tons of guys were wearing almost nothing in the way of web gear. All I am carrying is a cartridge belt with my 45 and a little ammo. Notice I've replaced my regular cartridge belt (worn in the Market‐Garden photos) with a beat‐to‐crud original. Remember these guys had to scrounge for ammo and gear before they went in. I am also wearing a “hobo roll” these were incredibly common in the latter part of the war, especially in the bulge. Just roll up some rations and a few other small personal items in a blanket and/or poncho. Use spare shoelaces or bits of leather to make a shoulder strap and you’re good to go! 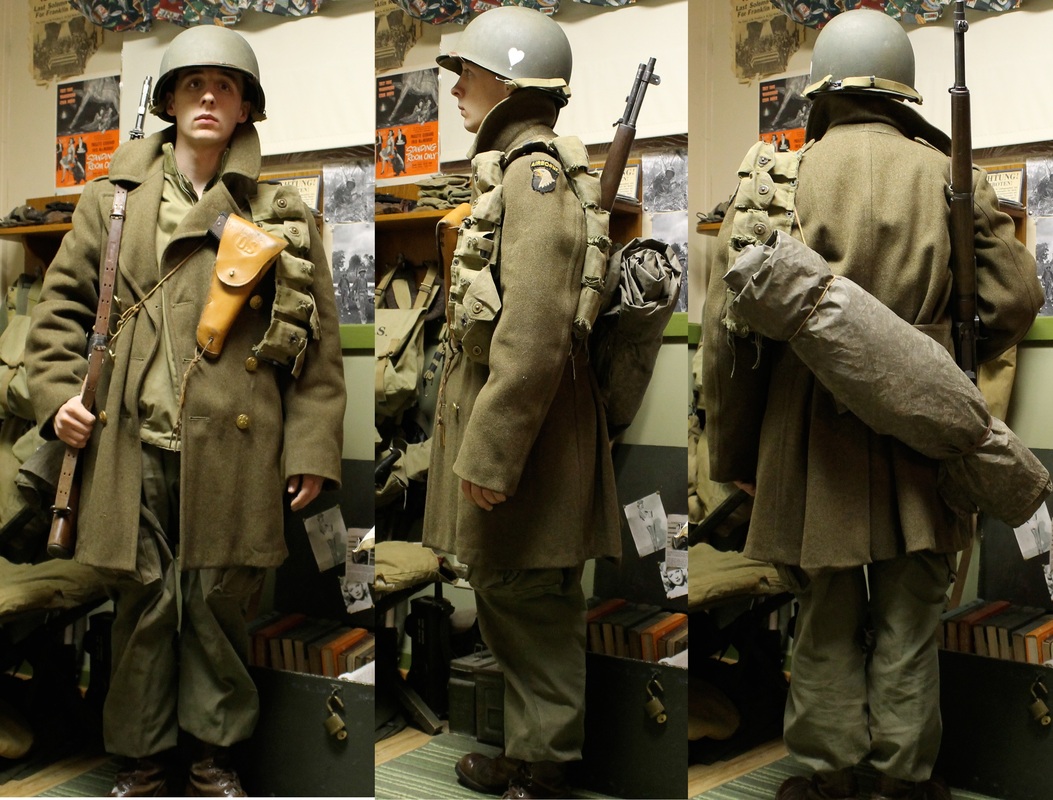 Late war March – May 1945
This impression would have been worn post Battle of the Bulge as the 101st moved across Germany, eventually landing in and around Zell Am See, Austria. We do few events with a late war theme, but the last several Dakota City events would have
been an appropriate time to wear this uniform. The 101st was not in combat during this time and thus dropped most of their combat gear when they were on the move.  The pistol belt is worn with nothing but a .45, canteen and first aid kit. Double
buckles were pretty common during this time, as they were in the bulge and Market‐Garden. M43s were pretty universal at this time and would have been fairly new and unused, as they would have been resupplied following the bulge. 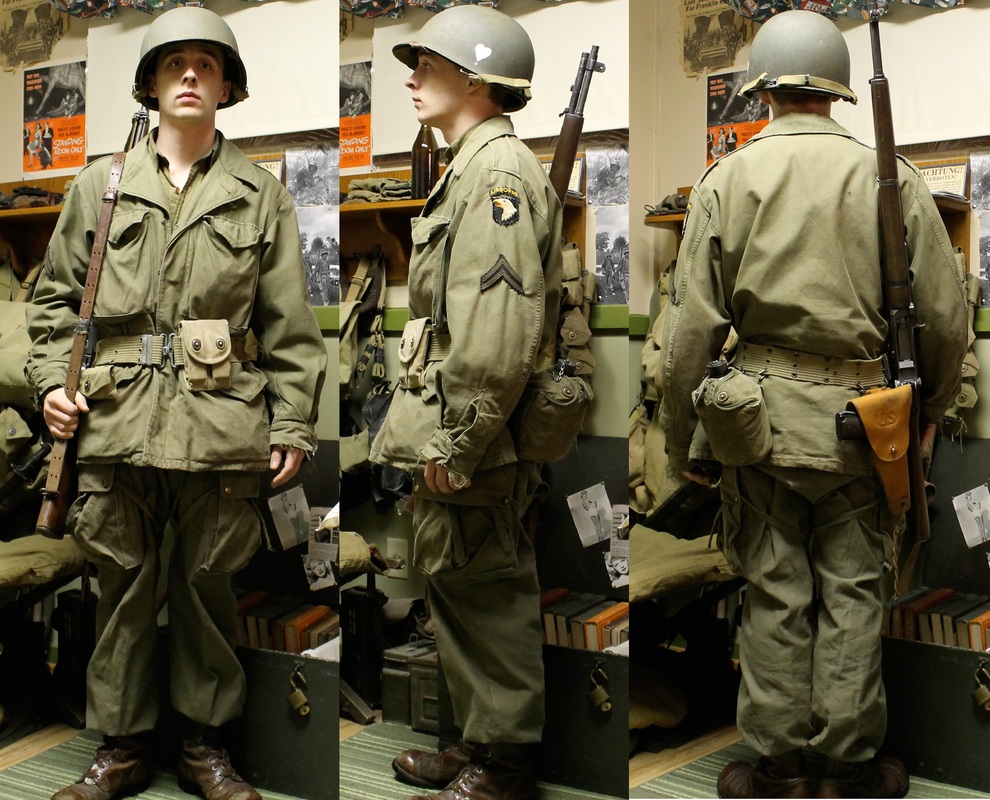 One of the easiest, cheapest and authentic things you can do when you portray a member of the 101st Airborne is to ACT like a paratrooper.  Cock your helmet and garrison cap, whistle at all of the dames you cross paths with and walk with a cocky gait.  These guys believed (and were) the BEST in the Army and acted like it. 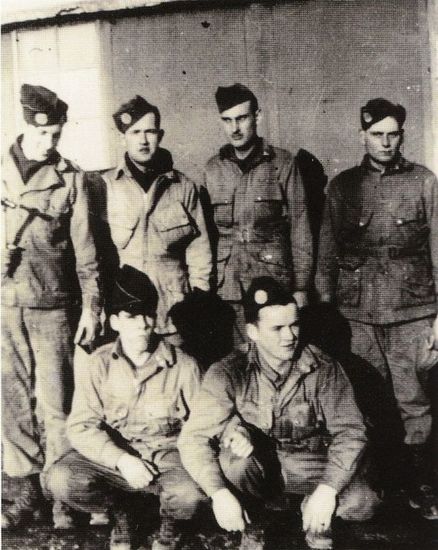