Why Re-Enact?
Babe Heffron and the death of the greatest generation 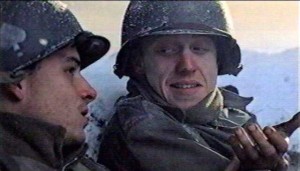 It’s become commonplace in the WWII reenacting community. Get on any social media site and you’ll see a post or a status update about the loss of another well-known WWII veteran. Earl McClung, Shifty Powers, Frank Perconte, Zane Schlemmer, Dick Winters.

This week it was Edward “Babe” Heffron, member of Easy 506 and longtime companion of Philidapihia’s most beloved one-legged resident, “Wild Bill” Gaurnere. He was 90-years-old when he died last Sunday.

I was upset when I heard of his passing but was comforted as I realized how well documented Babe’s story was. He’ll be remembered for decades to come, thanks to Band of Brothers and the memoir he wrote alongside Wild Bill. Babe’s story will be watched and re-watch, read and re-read. I wish I could say that about every other member of the greatest generation.

Babe Heffron, right, as portrayed in “Band of Brothers” by actor Robin Laing.


People too young to be reading this right now will never know the true impact of this generation. And, they will never have the opportunity to meet anyone from it. The greatest generation is on its way out. And when the last child of the depression dies I fear the wisdom they all brought to this Earth will cease to exist as well.

This extinction comes at a time when we need wisdom more than ever. My generation, Gen Y, has never known hard times. We (myself included) are oblivious to struggle and hardship. It pains me to see the last generation to have truly experienced these things fade from the limelight.

I am by no means disgusted by my own generation. Today’s twenty-somethings have a few things going for them. We’ve founded more businesses in our 20s than any other generation; we’ve moved forward on fronts such as social equality and environmentalism and are on course to become the most education generation in history, for what it’s worth.

Yet we seem to be dislodged from reality in so many aspects. We’re petty, sometimes arrogant and (yes I’ll even admit this) entitled. And losing our depression era elders will only further distance us, as well as the generations to come, from a time in our history when none of these traits were even fathomable, let alone acceptable.

Why I chose re-enacting  by D. "Ice" Eisenmann
Boys are instinctive when it comes to having a fascination for War.   We will take branches or broom sticks and pretend they are a weapon of some kind and try to eliminate the neighborhood kids or save the day depending on the scenario that day.  I have vivid memories of my uncle's farm growing up as I used to get to spend a week every summer helping to see what farming was all about and escape the city.  My uncle was in the Reserves during the time and I used to march around the farm in a Medium Alice pack and helmet, relishing every moment in his gear.  I have always gravitated to books on War and had a small collection of books on Vietnam and the Civil War but never gave WWII much thought.  History was always my favorite subject and for a short time, my college major, but the dates and facts remained on paper or in my head.

I remember when "Band of Brothers" came out on video and DVD and wanting to rush over to the video rental store (streaming was not invented yet) and see what the hype was all about.   I was instantly hooked and needed more information on the subject to fill the void after watching the entire series.  I went to Barnes and Noble and bought Steven Ambrose's book of the same name along with other books about Airborne troops.  I purchased "Saving Private Ryan" and watched it a couple more times on an in depth perspective.  While the authenticity of the Airborne troops was awful, the humanistic points captivated me.  I know have a huge bookshelf full full of WWII books and proudly about 98 percent I have actually read.

In my appetite for more information, I came across WWII re-enacting.  I had never heard of anything like living history outside of the living history farms that we have visited in school and honestly I cannot say that making cheese by hand really appealed to me.  Visiting my future's Unit's website and conversing with them through email on what gear I needed to attend an event opened a door inside of me.  Holding my M1 Garand for the first time was nearly a religious experience and one that I will never forget.

I have had a huge honor to take re-enacting to the next level and not just collect the gear and uniforms but also to connect with Veterans of WWII.  Getting to meet the Men that we are portraying is rewarding on a lot of levels.  Not only can we ask them questions and have them verify our gear but also just get to know them.   Sadly a lot of them are widowed and their families have moved away or don't visit very often and we become an adopted family in some ways.  During the events we bring them to, they are front and center and they get a some of the gratitude and thanks that they deserve.   They always thank us for spending time with them and helping to remember their friends and brothers in arms, when yet we are so grateful for the short time we can spend with them.  Teaching the younger generations of Americans that WWII was real and not just a video game and introducing them to the men that fought has fulfilled part of my nature.

Every family in America was impacted by the War, from having family members serve or manufacture things for the War or planting Victory gardens and rationing everything.  All aspects of our society from Pearl Harbor to the end of the War were focused on providing our Country the tools it needed to win.  Recently WWII films have taken Hollywood by storm and movies on the men and famous battles have proven to be money makers.  From the older standards of "A Bridge Too Far" or "Battle of the Bulge" to the modern day "Saving Private Ryan", "Band of Brothers, "The Pacific" and "Fury", audiences have flocked to films on the subject.  Something about that Era still captives our minds.

If you love collecting militaria or history in general, this hobby could be what you are looking for to not only connect with your past and what your relatives did during WWII, but also to teach, to learn and above all to help honor the Greatest Generation before they are gone from us forever.
Proudly powered by Weebly